Thanks to the qualified professionals of dental clinic DENTA.UA that for therapeutic treatment the teeth use advanced methods, technologies, medicines and materials, all procedures are painless. Our therapists always aim to preserve the natural tooth and restore its full functionality even with considerable damage to dental tissues.

Therapeutic dental treatment, is primarily of endodontic dentistry is related to the elimination of infections in root canals. Modern dentistry today, progressive diagnostic equipment, such as endodontic microscope, allowing you to accurately establish the degree of damage and effectively treat all of the infected canals and their many branches.

Mechanical development of one root canal with a hand tool

Filling of one root canal by the method of 3D obturation

A devitalizing bandage for pulpitis of permanent teeth using Caustinert

Reference 48
Medicinal treatment of a tooth in the presence of an inflammatory process in dentistry "ДЕНТА.UA" Kyiv, Osokorky, (M) Slavutich
700 грн
View

Sealing of the perforated canal with ProRoot material

Sealing of one canal with impregnating pastes

Sealing of one channel with sealers

Restoration of the crown part of the tooth before endodontic treatment

Reprocessing of one root canal Protaper Dentsply under the microscope 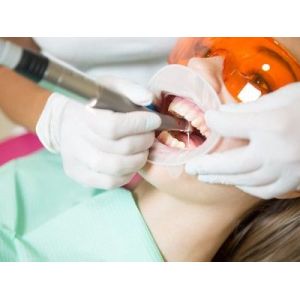 Canal treatment of the tooth endodontic dentist in the dental clinic Denta.UA

Modern treatment of diabetes is a complex preventive measures aimed at treatment of caries, pulpitis, periodontitis and other oral diseases and to restore natural anatomic shape of the dentition. If necessary, removing the nerve, cleaning of infected canals and their subsequent filling, which allows to recreate the original shape of the tooth.

Preventive dentistry aims at dental treatment with the purpose of preserving them. Modern methods allow to restore the tooth and its function, but also care about the aesthetic side. It should be remembered that it is not necessary to delay the visit to the doctor. For example, if you do not spend a timely treatment of caries, in the future it is fraught with complications and even tooth loss.

Our physicians have at their disposal the most modern materials and equipment. In some cases, the therapist asks for the help of related specialists.

Preventive dentistry involves depriving the patients from many problems. First of all, this dental fillings. In our clinic we use modern and high quality materials. However, in some cases it is necessary to resort to this method as the restoration of damaged teeth (installation of inlays and crowns). This is necessary if the tooth is destroyed in half or more.

Fillings in this case, already powerless — facing new challenges due to shrinkage of the material.

Preventive dentistry pays special attention to dental channels. Start the inflammation is not necessary — the more, the more protracted and difficult will be the treatment process. Might even have to remove the tooth. Therefore, the treatment of acute and chronic pulpitis it is necessary to start as early as possible.

Operative dentistry provides treatment of acute and chronic periodontitis. In this case, the period of treatment to the doctor also plays an important role. This disease often is painless and the patient is not always capable of the early detection. Preventive examinations at the dentist — a great way out.

Caries - a pathological process of progressive destruction of dental hard tissues — enamel and dentin. This insidious disease, which can lead to tooth loss.

With the development of the disease formed surface caries is the formation of dark pigmentation and softening of tooth enamel. Treatment of caries of the tooth at this stage, in addition to remineralization may include a more thorough treatment with subsequent filling.

With the progression of the disease, the rate of destruction of a tooth grows and develops medium and deep caries lesion of the enamel and dentin of the tooth with subsequent formation of a large cavity.

Treatment of caries in the middle and advanced stage include:

— thorough removal of infected tissues to prevent further inflammatory process
— medical treatment of the tooth,
— filling (layering of the filling material or the production tab), where the seal is installed the correct anatomical shape.

Treatment of caries should begin in the early stages of its development. It is therefore recommended that regularly — at least twice a year — inspection of the teeth by a dentist to determine the presence of caries.

There are few of the lucky ones who has never experienced a toothache. The most common cause of acute dental pain is pulpitis.

Pulpitis — inflammation of the tooth pulp, or, as it is often referred to as the tooth nerve. Tooth pulp is the soft tissue (nerve bundle) that is located inside the cavity of the tooth. Tooth pulp consists mainly of nerve fibers and blood vessels. In a healthy tooth pulp is practically does not extradite its presence, but it's worth it to become inflamed and the person is ready to "climb the wall" from unbearable toothache. For this reason, treatment of pulpitis, primarily aimed at eliminating painful symptoms.

Pulpitis can develop as a result of deep caries, tooth trauma, chemical or thermal effects. Also cause pulpitis may be associated with spread of infection through hematogenous flow of blood in certain diseases. Complications during treatment of caries can also cause pulpitis.

The symptoms of pulpitis

The main symptom of acute pulpitis is the appearance of spontaneous pain, especially at night. The pain may be paroxysmal, localized in one tooth. Hot, cold, sweet only enhances the intensity of the pain. Inflammatory pain may radiate to ear, temple, neck. You may feel pain even on the opposite jaw.

In chronic pulpitis not periodically disturbed sharp spontaneous pain, and mild pain after a meal and hot and cold.
Treatment of pulpitis is aimed at the removal of pain and elimination of the causes of pain — namely, the removal of inflamed pulp.

Methods of treatment of pulpitis

The stages of treatment of pulpitis

Surgical method of pulpitis treatment is based on complete removal (resection) of the pulp with subsequent filling of root canals of the tooth.

The surgical technique most frequently used in clinical practice for the treatment of both acute and chronic pulpitis. This method consists of several stages.

A welcome method of treatment of pulpitis is without the use of arsenic, the nerve is removed under anesthesia.

Under local anesthesia removes carious tissue and reveals the tooth cavity. Then made the removal of the inflamed infected pulp. The root canals of the tooth are carefully processed special (root canal) instruments with the residues of the pulp and remove the layer of infected tissue from the inner surface of root canals. In the process of machining the canal repeatedly washed with antiseptic solutions (chlorhexidine, sodium hypochlorite, etc.). This is especially important in the treatment of pulpitis, when the pulp necrosis and infection of the tooth root.

Treatment of pulpitis often carried out with a provisional temporary filling of root canals with antiseptic anti-inflammatory pastes. And then the roots of the tooth permanently sealed.

Devital method of treatment of pulpitis is based on the use devitalizing funds. Simply kill the nerve with arsenic less toxic bezmalinovic funds. Demetalizarea tool superimposed a few days, after which the nerve is removed.

One of the most common complications of pulpitis is periodontitis. Infection that is inflamed pulp, slowly penetrates beyond the tooth and causes inflammation surrounding the tooth root tissue — developing periodontitis. Periodontitis is dangerous because this disease is the gradual destruction of the bone around the roots of the tooth. Chronic periodontitis often occurs the formation of granulomas, cystogranulomas and oculocardiac cysts. Such chronic inflammation very poorly amenable to therapeutic treatment and often result in the removal of the patient's tooth. In addition, these chronic inflammatory conditions cause the spread of infection from the blood stream throughout the body that can trigger chronic diseases of internal organs.

Periodontitis is a severe complication of caries, in which there is inflammation of the periodontium (connective tissue between the tooth and its bone bed). This disease is accompanied by swelling, pain, worse from hot and mechanical effects.

The first step in the treatment of periodontitis is mechanical treatment of the tooth and clean the canals (infected tooth removed). Then cleaned the canals are disinfected and, as necessary, administered drugs. Treatment of periodontitis - a thorough and long process that takes several appointments. The final stage of treatment for periodontal disease involves a thorough filling of root canals, and restoration of the form and function of the tooth with filling materials.

If periodontitis is not treated on time, it can lead to serious consequences and even to tooth extraction and future prosthetic.

Endodontics is the area of dentistry that studies the structure, physiology and pathology of the pulp of the teeth and tissues surrounding the tooth root. It refers to the most difficult, demanding especially high skill disciplines of dentistry. Proper root canal therapy is a very complex and responsible task. Directly depends on its quality tooth integrity and success of further restoration work (fillings, inlays, crowns, bridges, dentures).

With the latest technology quickly and at the highest level to make the treatment even in the most difficult cases.

In the channels of the teeth is a soft tissue — pulp, or "nerve" inflammation which becomes the cause of severe dental pain. Science has proven that the main cause of pulpitis is infection. Bacteria that thrive in carious cavities under the bad (i.e. leaking) seals and reach down to the nerve. For nerve inflammation characterized by a rapid progression when the infection spreads to the periodontal tissue (periodontium). When inflammation of the periodontium the person experiences constant pain and sharp pain when biting. Long-term inflammation leads to bone resorption ekologiniai and the result is a granuloma or a cyst. As a chronic focus of infection, such processes constantly "feed" the bacteria the entire body and can lead to diseases of the heart, blood vessels, liver, kidneys and more.

You must understand that without the restoration of the upper part of the tooth root canal treatment is not effective!

Our methods of treatment and professionalism allow doctors to save even severely damaged or infected teeth, prevent complications leading to tooth loss, serious illness of soft and bone tissue.

We remind you that prevention is better to prevent! It is necessary to observe hygiene of an oral cavity, and also to produce professional dental hygiene. Do not forget to regularly visit the dentist for early detection of diseases.